Coffee first. Our last stop at Satan’s coffee. Farewell to my friend Carlos. He has found a BJJ gym. He will get his black soon. We exchange Instagram accounts. I feel like a millennial. I mess it up. He just takes my phone and sorts it.

We need to grab some food for the trip. 20 - 24 hours depending on conditions. Top up the sim cards. We got to Vodafone. We have noticed here that bikes and dogs and the like are welcome in stores. We wheel our bikes in like we have done everywhere in Spain and Portugal.

There is a guy sitting on a seat. He looks at us and says -

Guy - ‘Would you like me to bring bikes into your loungeroom?’ (German accent)

Grant - ‘Is this your loungeroom?’

Guy - ‘It is very rude what you are doing. How would you like it if I just did this in your house?’

Grant - ‘This isn’t a house. How about I ask the staff? If they want me to leave, I will leave?’

Guy - ‘you are very rude just bringing your bikes in here’

Grant - ‘OK. You have had your say. Time to stop talking’

Guy - Keeps mumbling. On and on. Getting more offensive. Something about shitting in our living room.

Guy - ‘No need to be aggressive. I am here being nice’

And so it went. There was an ultimatum from me, he chose to stop talking.

I later found out rather than continue with me, as he was leaving with his friend he said something to Shell. I didn’t hear or see. It speaks volumes that he would do that. The entire situation was with me. He chooses to make a comment to Shell as he leaves. Shell had not said a word to him throughout.

In hindsight, I should have ignored him. A tall guy. A big guy. Probably used to getting away with taking things a little far. I think what he said at first was not unreasonable. It took me a while to get used to dogs and bikes in stores. But he just kept it going. His tone was never aggressive, but the things he was saying.

“It does take great maturity to understand that the opinion we are arguing for is merely the hypothesis we favor, necessarily imperfect, probably transitory, which only very limited minds can declare to be a certainty or a truth.” ― Milan Kundera

We grab a late lunch before heading to the Grimaldi terminal. Check-in and take a seat while we wait for the ferry to arrive. We have a cabin. With a window. I am excited to leave.

The ferry is late. At 10.30 pm we are asked to board. I assumed we would board with the cars. Instead, we get an escort with the semi-trailers. It is night. Hectic. Trucks tearing on. The bike section is two hooks on the wall with all the trucks. Ropes to tie them on in case of bad weather. 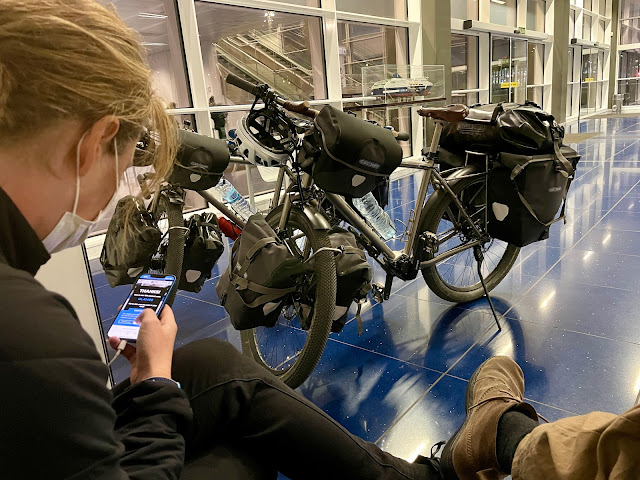 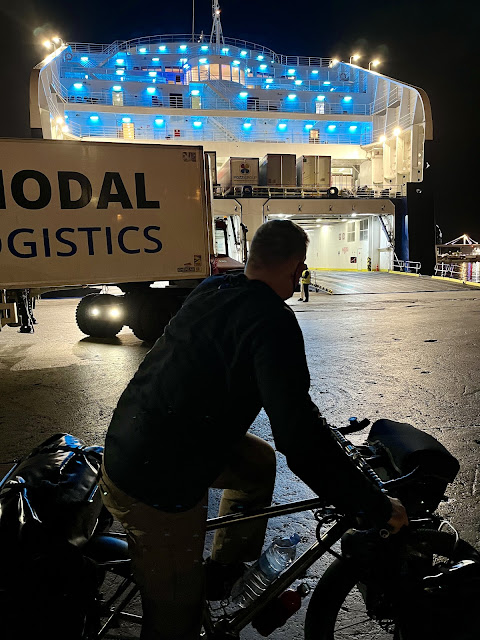 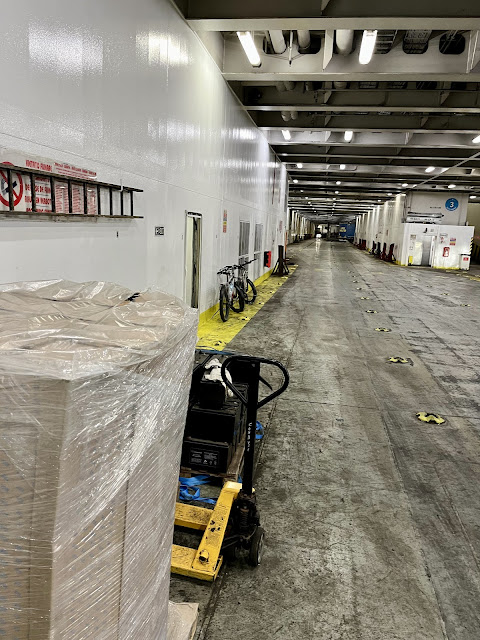 We lug the paniers up to our room. Shower. Crash on the single beds. We disembark at 1.00 am. The expected arrival time is now 10.00 pm tomorrow evening. 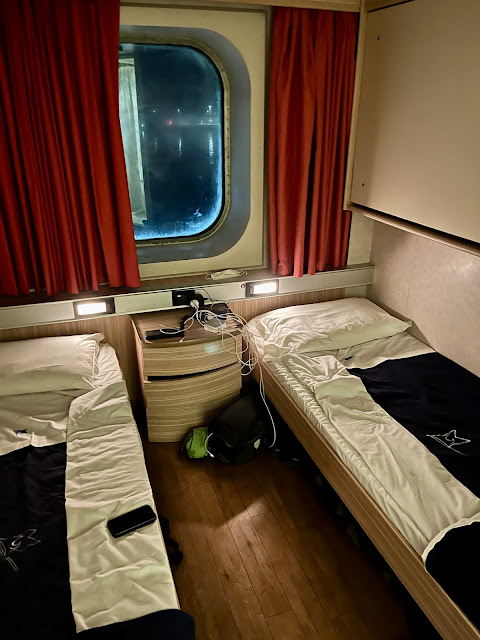 Spain and Portugal were amazing. Barcelona, Bilbao, and Seville are etched in my memory forever. Barcelona reminds me of Melbourne.

I fall asleep thinking about Italy. Rome after Civitavecchia. Why not north? Tuscany? We have a week to kill before Ali and Nuria arrive. We could lose a month in Chianti.

“To reach a port we must set sail – Sail, not tie at anchor Sail, not drift.” ― Franklin D. Roosevelt