It is Shell’s birthday. We don’t celebrate birthdays. Along with Christmas, Valentines Day, and the rest, it is consumerism. Buying something you do not need to show someone you care. If we need something, we buy it. If Shell needs a gift from me to show her she means absolutely everything to me, I am doing it wrong.

You are my universe, Rachelle. Every day, including today, which happens to be your birthday.

It is a strange custom. We don’t do anything on the day we are born. All the work is done by someone else. We are not surviving danger on the savannah. The passing of another year in this day and age, where we live, is not a real achievement. In my mind, we should celebrate those who have died, a death day. All that they did. All that they didn’t do. What they meant to who. Unlike the ‘birth’ day, you won’t be there for yours. Suits me.

“The human animal is a beast that dies and if he's got money he buys and buys and buys and I think the reason he buys everything he can buy is that in the back of his mind he has the crazy hope that one of his purchases will be life everlasting!--Which it never can be....” ― Tennessee Williams 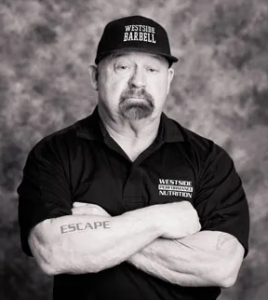 Louie Simmons passed away today. Most people will not know the name. He was a legend in the strength industry. His gym, Westside Barbell, produced world champions that were untouchable. In the realm of powerlifting and strength training, he was King. A decade ago, his conjugate system changed the way I trained. I was not strong until I trained his system. Strength names like Jim Wendler and Dave Tate came out of Westside. Wendler's 531 is a stripped down version of Louie’s work.

Vale Louie Simmons, my name will never be your chalkboard, but without you, my numbers would have been rubbish. I will raise a beer tonight with my training partner Mitch O to celebrate Louie’s death day.

“The fear of death follows from the fear of life. A man who lives fully is prepared to die at any time.” ― Mark Twain

We are up early. Train to Bergamo. Arrive with plenty of time and get pulled aside by the Police for a passport check. Normally this would not be an issue, but our Visas expired weeks ago. All well and good for the consulate to say medical treatment is enough for an extension. Another thing altogether to explain this to the Carabinieri. All is well, they didn’t even check.

We are at the right station. Board the train and sit back on the very fancy, very fast train. I know it is fast because ‘fast train’ is written down the side. We read most of the way. There is not much to see out the window. The trip is done in three hours. The train travels at 250 km/h.

We arrive in Milan and I need to grab tickets to Bergamo. I head into the main area while Shell waits on the platforms. It is 1.15 pm and there is a 2.05 pm to Bergamo. Enough time to grab some lunch.

It is busy. I line up at a self serve machine. The guy in front of me is buying his tickets and there is a man helping. The problem is, he does not want help. The guy is not staff. I look around, the helpers are everywhere. These guys ‘help’ for a few euros.

The guy is trying to read the screen and the helper is dashing ahead, pushing buttons. He is getting more and more agitated. Three times now he has told him to leave him alone. They are speaking Italian, but even with the language barrier, it is clear. Finally, the guy just cracks him on the forehead with the corner of his phone. The helpers hand grabs the spot. I am not sure if he was shocked or it hurt. Guy grabs his tickets and heads off.

I walk up the same helper approaches.

‘Where are you going?’ he asks.

I look up and he has a nice gash on his forehead and blood is trickling down. I ignore him. Change the language to English.

‘Where are you going?’ he asks again. I don’t answer and his hand reaches across and changes the language to Italian.

I look at him. Look right through him. He looks at me. I can’t read him and he looks away. A lot is going on in my mind. He didn’t take the hint last time. It didn’t bother me that he got hit. He pushed his luck. Probably didn’t deserve it. But here is a guy just trying to make a dollar. He is not begging. He is not stealing. It is not really a hustle. It is basically honest work.

I change the language back to English.

He says nothing. I fumble my way through. Get me tickets and he is still there. He can hold my eye. I think about it for a second. He hasn’t asked for anything. I decide he can have whatever is in my pocket. I give him about four euros in change.

He gives me a thank you and I head off.

We are sitting at lunch and I am telling Shell the story. I didn’t tell her that I gave him the change. I am not sure why. When an old man approaches asking for money. He is working through the bistrot asking everyone. I only have big notes and I feel terrible I have nothing to give him. I watch him move around. Think about his dignity, his self worth. Eat my slice of pizza and forget him.

“Dignity does not consist in possessing honors, but in the consciousness that we deserve them.” ― Aristotle

We jump on the train to Bergamo. Nothing to report. It is a slow train, but it is not written anywhere. We hit Bergamo, check in. Grab some groceries and chill for the afternoon.

Shell is having a sleep. I think we are catching up with Keliegh later.