The rain has set in. We have the day off riding.

We stroll around Mostar. It is a cool little village. A little tourist orientated for my liking. We grab a Bosnian coffee and pay too much. Lunch in Old Town and talk about the weather. Rain is forecast for the next few days. 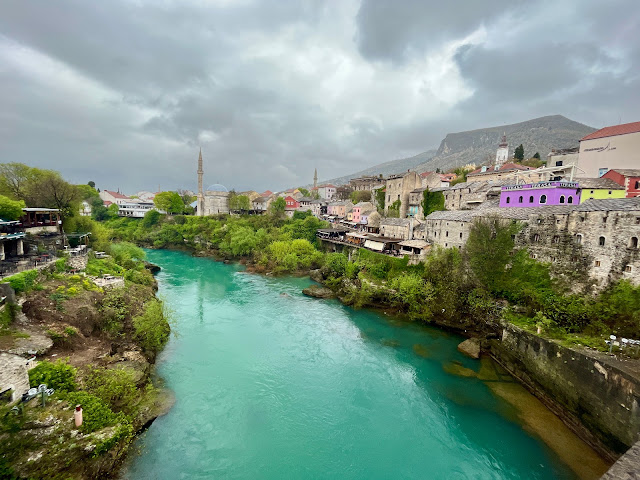 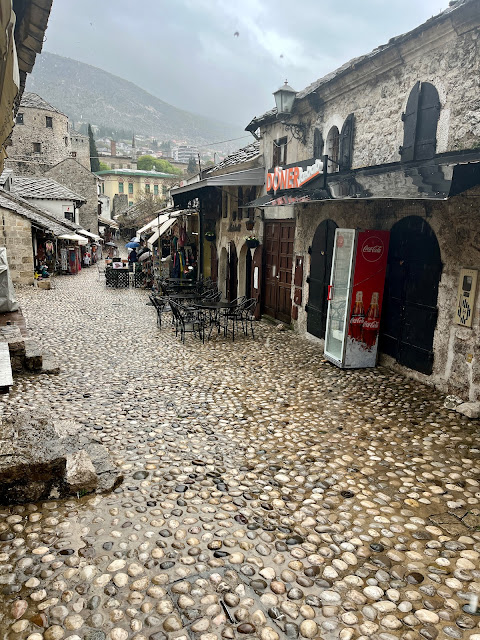 We decide to head to Sarajevo on the train and see out the wet weather. Our host tells us he will store the bikes and gear. There are two trains to Sarajevo. One leaves at 6.30 am, the next at 5.00 pm. We decide on the early train.

We are woken up just before midnight. Earthquake. 5.7 on the Richter scale. One person dies and there was some damage.

“It takes an earthquake to remind us that we walk on the crust of an unfinished planet.” ― Charles Kuralt

Up early to the train station. The rain holds off while we walk. I am looking for earthquake damage. There is none I can see. 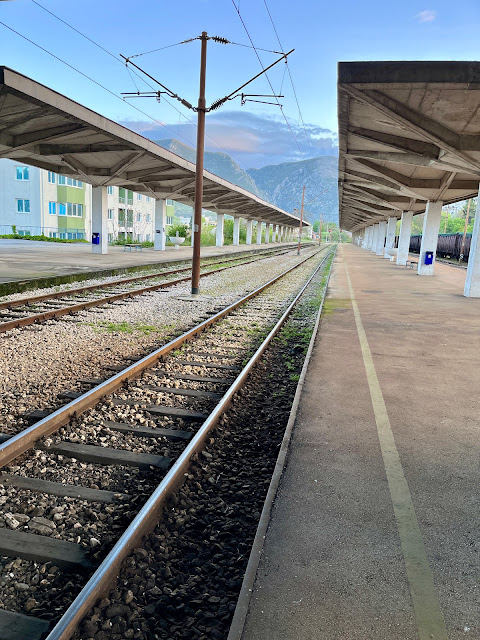 The train from Mostar to Sarajevo is a beautiful ride. About two hours in duration, it follows the Miljacka river and winds through the mountains. Even in late April, there is still snow on the higher peaks.

Our place agrees to store our bags and we head out for coffee and a look around. I like Sarajevo more than Mostar. We watched a documentary on Al Jazeera about the Bosnian war featuring the Holiday Inn Hotel.

I have a vague recollection of the war in Bosnia. I was 18 years old when it started. I was not really thinking beyond myself at that age. An insulated life in Australia. Self centered. 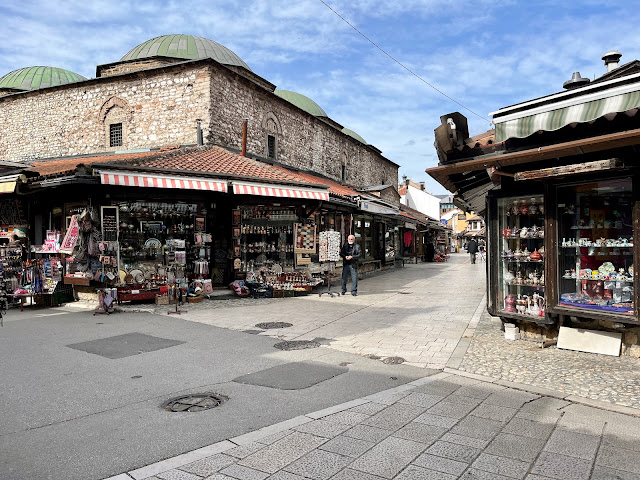 We head to the Genocide Museum. We did the same in Cambodia. If you want to know a place you need to understand what it has endured. It is staggering that this conflict happened when I was an adult and I had no idea.

There are Catholic Croatians. There are Muslims, called Bosniaks. There are Serbian Orthodox. All living in Bosnia. In 1992 the Bosnian government agreed to independence from Yugoslavia. The Serbians did not like this. Tensions were already high when a Muslim shot the father of the bride in a Serbian wedding party.

That is all it took. The Serbian paramilitary with the backing of Yugoslavia surrounded Sarajevo and commenced an ethnic genocide of the Bosniaks, the Bosnian Muslims. 100 000 Bosniaks were killed. 200 000 were displaced. Countless more injured and tortured.

There is death and suffering in war, I understand that. What I have never understood is the dehumanisation and the torture of fellow human beings. Torture for no reason. Humiliation and pain. What the Bosniaks, men, women, and children endured at the hands of the Serbian military is heart breaking.

“That war [Bosnian war] in the early 1990s changed a lot for me. I never thought I would see, in Europe, a full-dress reprise of internment camps, the mass murder of civilians, the reinstiutution of torture and rape as acts of policy. And I didn't expect so many of my comrades to be indifferent - or even take the side of the fascists.” - Christopher Hitchens 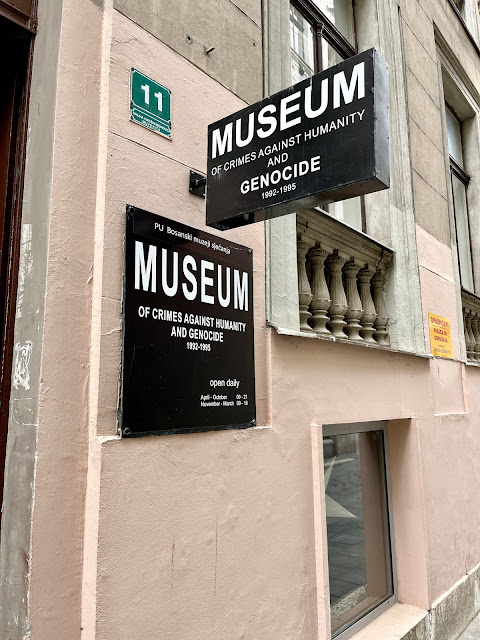 The ethnic divisions remain today. From the top to the bottom. There are three leaders in the Government, always one each Muslim, Orthodox and Catholic. Milorad Dodic is the most powerful. He is a Serb. He is a genocide denier. Things are getting hostile again. He has support from Serbia and Russia. Elections in October.

For three years the West did nothing. What will we make of Ukraine in thirty years' time?

We stroll about town. It is a beautiful city. Most of the buildings have been rebuilt. Some still have shelling and bullet marks.

We check out the Latin Bridge. It was here Archduke Franz Ferdinand, heir to the Austro - Hungarian Empire was assassinated on 28 June 1914. This was the catalyst for WWI. He was assassinated by the Black Hand. A Serbian military group committed to the independence of Serbia. 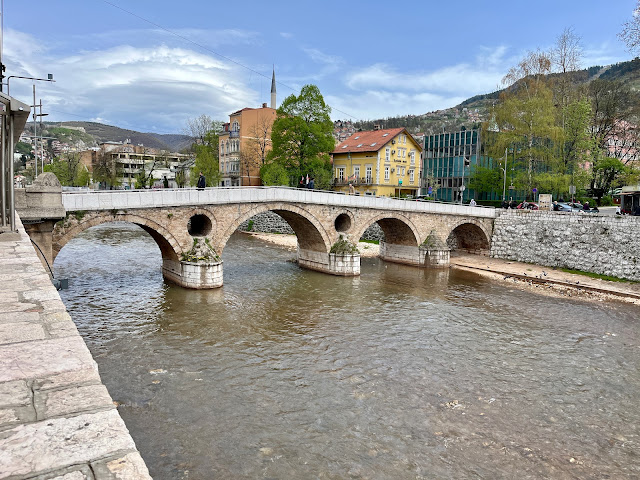 I am seeing a pattern here. Calm down Serbia.

“Borders are always dictated by the strong, never by the weak.… We simply consider it as a legitimate right and interest of the Serb nation to live in one state. This is the beginning and the end.… If we have to fight, by God we are going to fight. I hope that they will not be so crazy as to fight against us. If we do not know how to work properly or run an economy, at least we know how to fight properly.“ —  Slobodan Milošević

With elections looming, this is the first country we wanted to spend more time in but decided to leave.

We head to the Holiday Inn for our last night in Sarajevo. The Holiday Inn was featured in the documentary we watched on the Bosnian war. It was here that foreign journalists were based during the war. It was often shelled and the lobby was mortared.

It is an iconic building. Bright yellow. Classic 80s architecture. It overlooks the main road. Dual lanes with a tram system down the middle. The wide open stretch became known as sniper alley during the conflict. Serbian snipers sat in the mountains and picked off hundreds of men, women, and children.

“They say of a sniper’s bullet that it if you hear it, then you are safe, because it will already have passed safely by. It is the ones that you don’t hear that do for you” ― Sohni 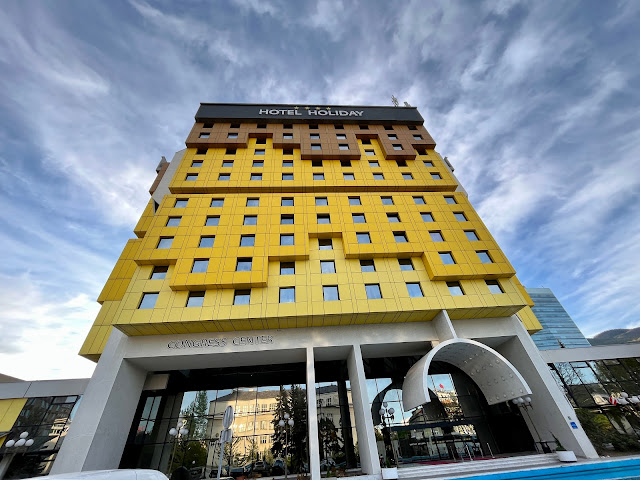 We look for the National Library but cannot find it. It should be at the University. We are at the University. A different search tells us it is back in the old city. Never mind. Lunch and a bottle of local white wine and our poor map skills are forgotten.

We skip dinner and change our plans to head back to Mostar on the early train. Fine weather forecast. It will be nice to see Mostar under a blue sky. 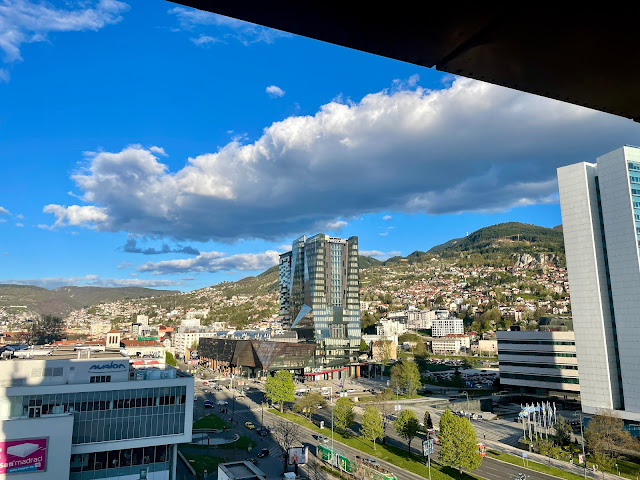 Macron has won the election. The world seems a little saner for now.