I slept terribly. The room felt hot and humid. I could not get warm with the blanket off and was too hot with it on. I am up at 5.30 am. I feel fine considering the bad sleep.

“He would lie in the bed and finally, with daylight, he would go to sleep.” ― Ernest Hemingway

Bacon, eggs and tomatoes for breakfast. We head off with blue skies. Today’s ride is 46 km long with 220 m of climbing. We are mostly on a state road, but traffic is pretty light.

It is pleasant riding. After a few kilometres we turn off toward Otočac and see a sign. Zagreb is under 200 km away. We are only 4 - 5 days riding from our destination. Yesterday was not much fun. I was a little over riding. Today is great and suddenly I don’t want Zagreb so close.

“There is no real ending. It’s just the place where you stop the story.” ― Frank Herbert 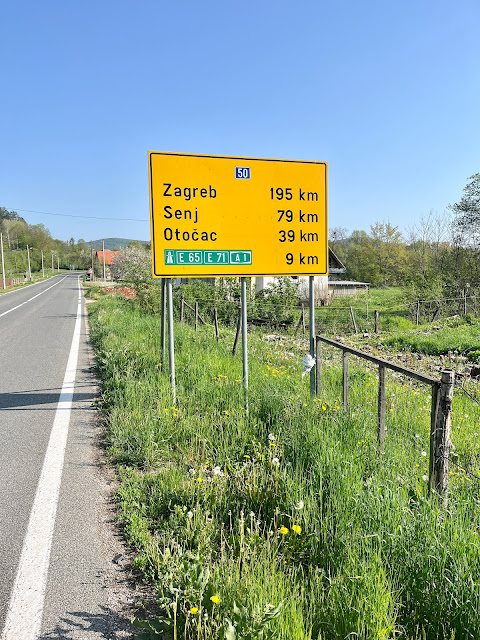 Perspective. A tough ride and average sleeping quarters and living out of panniers seem like no fun. Today, it is fun again. Even after a bad night's sleep. Am I really that fickle?

We grab a coffee at Perušić. The village is the largest in the region. Entirely agricultural and shrinking. Since the 1991 war, the population has shrunk by a third. Shell starts reading the history of the area. Perušić was on the frontline of the 1991 war for independence from Yugoslavia.

Further back in history we get another dose of WWII atrocities. In August 1941 the Ustaše regime butchered more than 280 Serbs in Perušić. An estimated 191 of these were children. 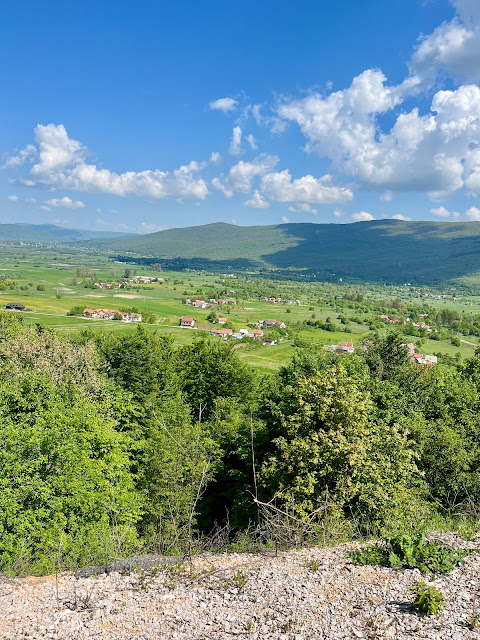 We head off. It is a beautiful ride. We cruise along and before too long we are on the outskirts of Otočac and crossing the Gačka River. We stop on the bridge to watch the water. I have never seen water so clear, fast running, and deep. The river weed sways in the current. Hypnotic.

The trout swim against the current. There are at least six. I have never seen wild trout. They slowly hold their position in the river waiting for insects to hit the water. Rise up and swallow. 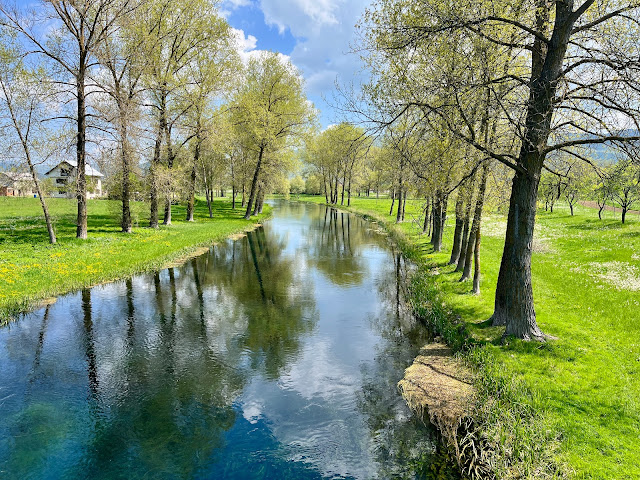 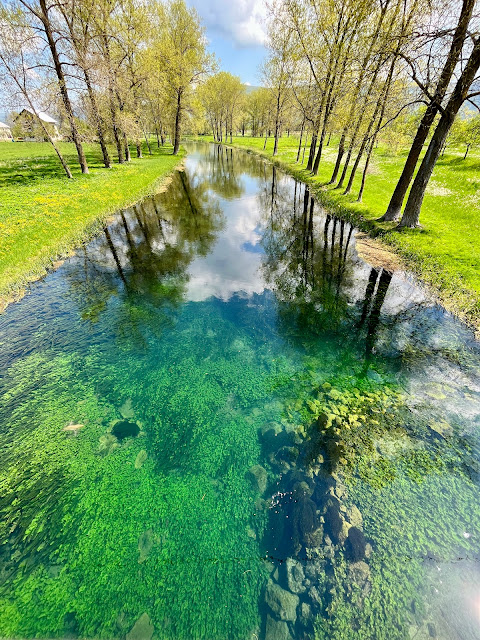 Time stops as we watch the fish in the clear water. I am not sure how long we spent watching the water flow. We have talked about buying land one day. Planting a garden, an orchard, and maybe some livestock. Living off grid. To have a river like the Gačka flow through your land would be incredible.

“Have you also learned that secret from the river; that there is no such thing as time?" - Hermann Hesse 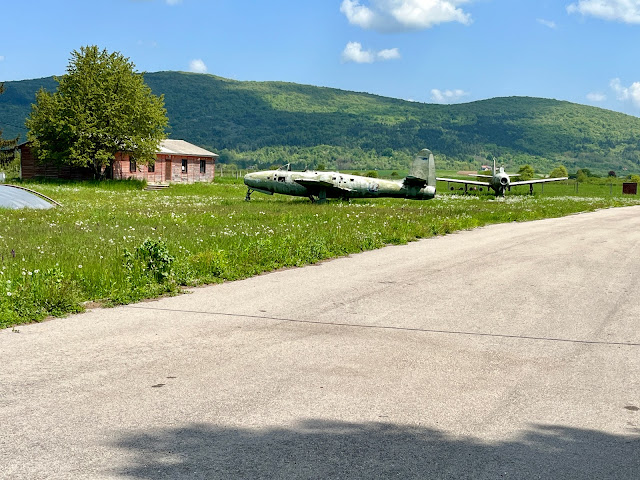 We arrive in Otočac and pass straight through to Bistro Ribič for lunch. Perched on the Gačka, it serves trout caught fresh from the river. We order trout grilled and pan fried.

Freshwater fish does not get much air time in Australia and we avoided it in Malaysia. I guess when you are surrounded by the ocean or polluted rivers that makes sense.

Fresh trout is a delicacy. It is sweet, moist, and utterly delicious. I have mentioned previously how the gardens are full of potatoes. Our trout came with two types of potato, one floury, the other waxy. They were boiled. No butter or dressing. I have never eaten potatoes quite as tasty. 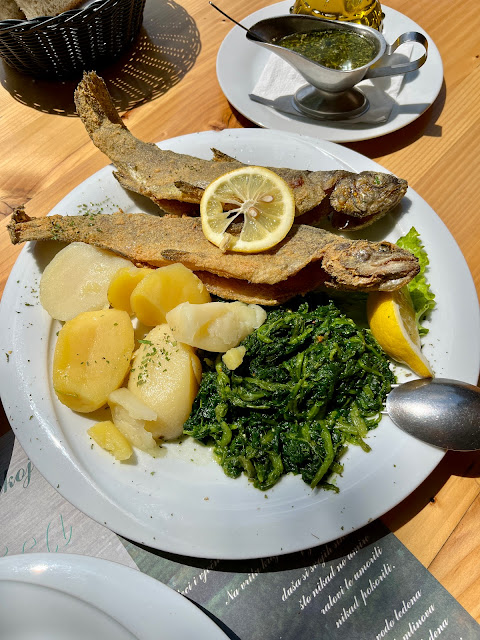 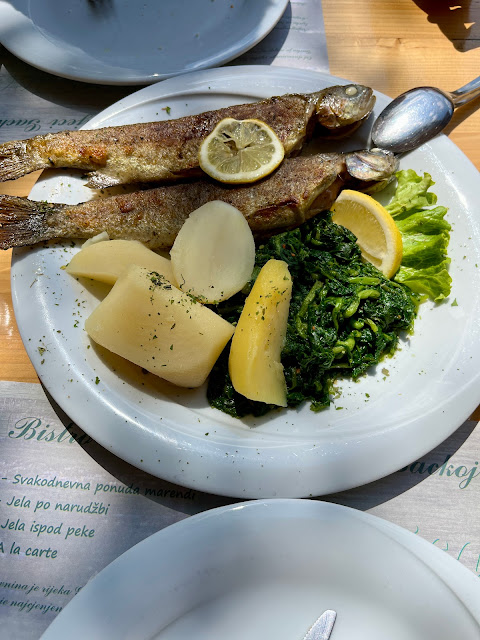 We head to the park for a few hours. Our place will not be ready until 3.00 pm. Read my book and lay in the shade. Shell has sent me a link to Otočac and its history. Not to be outdone by Perušić on the wartime atrocity front, in late April of 1941 around 331 Serbs were forced to dig their own graves before being hacked to death with axes.

I cannot comprehend the cruelty mankind can inflict upon its brothers and sisters. The Serbian neighbors must have been viewed as less than human. In one case an Orthodox priest was made to pray for the victims while they were butchered, including his son. Afterward, his eyes were gouged out and he was skinned alive.

It's hard to imagine the peaceful town we are sitting in was the scene of such horrors.

Fifty years later similar was committed by Serbs on Croatians.

Our place is out of town on a hill. It has cats. They are friendly and want to come inside. One in particular scratches and bites when you pat her. She is my favourite. She reminds me of Shell.

We considered staying here for a few nights but we both feel good. We will ride tomorrow. Depending on how we feel, we might conquer the next mountain in one day.

Or not. There is no rush.

We spend the afternoon in the sun with the cats reading our books. 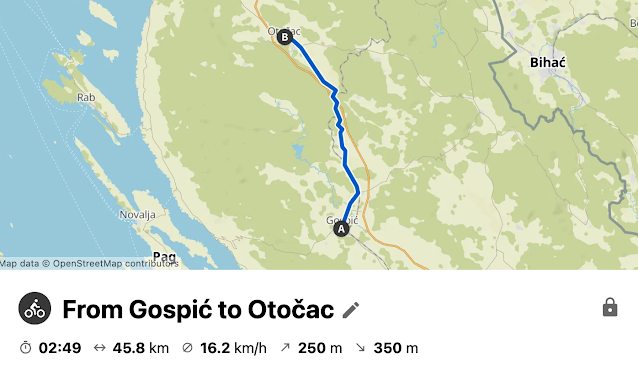 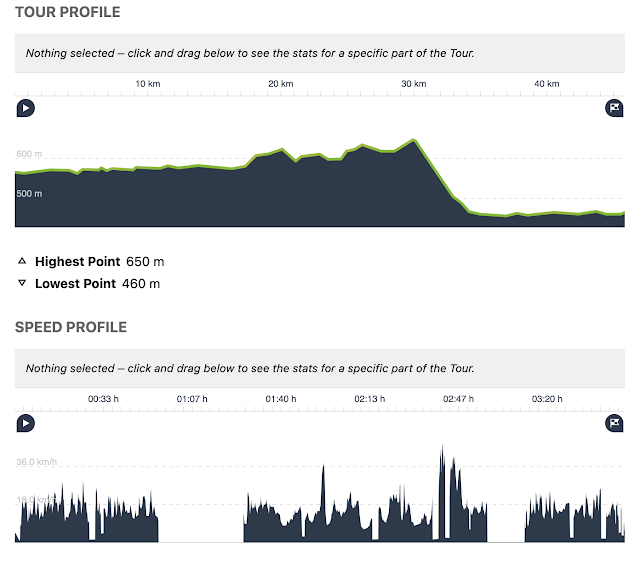